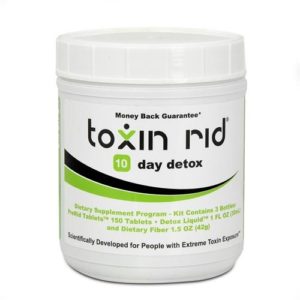 TestClear is an industry leader in drug testing solutions which has been operating for 23+ years. TestClear sells only proven solutions to help individuals pass drug tests worldwide. The brand offers a wealth of drug testing information, including helpful how-tos, customer reviews, and information about what to expect during your drug test.

Their website is an excellent resource for more information about drug testing, especially if you have never been drug tested before and don’t know what to expect. Their top-notch customer service experts help you find the product that’s right for you. You will also have many shipping options to get the proper test to you in plenty of time, guaranteed.

Need to pass a drug test and want to try Toxin Rid 5 Day Detox or 10 Day Detox? Use our unique TestClear Coupon Code ‘TESTCLEAR10’ for 10% off your entire order!

The different components of the Toxin Rid 5 Day Detox and the Toxin Rid 10-Day Detox programs come sealed inside a plastic jar (think the type used for protein powder). Inside the 5-Day program, you’ll find 75 PreRid tablets split between two bottles: one 60-count bottle and one 15-count bottle. You’ll also find a 1.5 oz bottle of dietary fiber and a 1 oz bottle of Detox Liquid. The 10-Day program contains the same dietary fiber and detox liquid but contains 150 PreRid tablets.

The instructions for the 5-day and 10-day detox program are the same and are listed on the side of the jar: take three tablets at once, every hour for five consecutive hours each day leading up to the day of your test. Then, after consuming your last three pills on day 5 (or 10), you’ll finish half the liquid, then take the other half two hours later.

The dietary fiber is designed to replenish your body with some of the compounds lost during cleansing, so you’ll take it at the end of the cleanse. That said, you won’t need to take it if you’re using a cleansing drink on the day of your test.

The PreRid tablets smell very much like hay or alfalfa, similar to a farm livestock smell. The scent isn’t overpowering, and it doesn’t linger unpleasantly or impact the taste.

The Detox Liquid smells very saline, like extra-concentrated seawater or brine, with a metallic tinge. There’s also an acidic component to the scent, similar to citrus but much more biting. We’re glad there’s only 1 fluid ounce of this stuff! The smell isn’t strong, but it also isn’t appealing.

The dietary fiber smells similar to wood pulp, though not as strongly scented. There is a subtle sweetness to the smell, and the overall profile is very mild.

The PreRid tablets taste a little vegetal (or even grass-like), but it’s very subtle and hardly noticeable as they’re going down. They won’t leave you with an aftertaste or have you burping hay after taking them.

The following will sound really dramatic, but we assure you that what you’re about to read reflects, in the most accurate of terms, what consuming this product is like:

The Detox Liquid is probably our least favorite thing we’ve ever put in our mouths. The instructions suggest taking the liquid with 16 oz of orange juice instead of water, and we strongly advise you to do that. Water alone does not kill the taste, and you can only drink 16 oz of fluids after downing the Liquid.

Mercifully, you need only down half an ounce twice. The second time, we used a drinking straw to direct the liquid to the back of our mouths to minimize contact with taste buds. It feels a bit silly drinking such a small amount of fluid through a straw, but it helps get it down.

The fiber is to be mixed with 16 oz of water and gulped down quickly. It doesn’t taste great, but it’s honestly a cakewalk compared to the Detox Liquid. Be sure to drink it quickly, or you’ll be left with a gelatinous mess that isn’t drinkable. You’ve got 3-5 minutes to get it down.

The PreRid tablets are an off-white, flecked with bits of green and brown. The tablets themselves are pretty large: nearly an inch in length. If you have difficulty getting pills down, you can break the tablets in half, or even quarters, to make them easier to swallow. That said, do not crush them to powder.

The Liquid is clear, with a very subtle warm tint to it. It’s got an acidic feel to it, similar to vinegar but with a more severe afterburn.

The dietary fiber is granular, halfway between sand and flour in terms of consistency. It blends with water easily but will thicken into a gelatinous semi-solid if left unattended after mixing for too long. Drink within 3-5 minutes to avoid having to take your fiber with a spoon.

The first four days of the detox (or nine days for the 10-day program), you’ll take 3 of the PreRid tablets each hour for five consecutive hours with 8 oz of water. We felt cleansed during this time; between the increased water intake and the pills, we needed to be close to a restroom.

We finished our final five doses of the PreRid tablets on the final day, then waited 2 hours without eating or drinking as directed. We then took the first half ounce of the Detox Liquid, which was rough. We chased it with 8 oz of water but still tasted the liquid, so we drank an additional 16 oz of orange juice, which is also permitted, for a total of the 16 oz instructed. The orange juice was much more effective at killing the taste of the Detox Liquid.

We waited another two hours (again, without eating or drinking per the instructions) before consuming the remaining half ounce of the Detox Liquid. This time, we sipped it through a drinking straw positioned at the back of the mouth to minimize contact with the taste buds. This technique helped reduce the aftertaste, making the 16 oz orange juice chaser much more effective.

We waited about an hour after taking the second dose of Detox Liquid before taking the fiber, which we mixed with 16 oz of water. It doesn’t taste great (perhaps a tad musty), but it’s much more tolerable than the Detox Liquid.

Per the instructions, we tested our urine one hour after taking the dietary fiber. Drumroll…we PASSED! This was true for both the 5 and 10-Day programs. We’re pretty heavy cannabis consumers, so we were happy to find that this product is powerful enough to cleanse urine of THC and its metabolites, even for daily smokers.

A note about dissolvable fiber

If you don’t drink the dissolvable fiber quickly, it will thicken and become a gelatinous — and decidedly undrinkable — consistency. You have a few minutes to get it down before this happens, so drink quickly! You’ll likely have to use the restroom after drinking this — we sure did — so don’t take it before hitting the road to drive to your testing location.

The Toxin Rid 5 Day Detox runs $109.95, and the Toxin Rid 10 Day Detox variety is $189.95, which is pretty expensive, we know. It works out to about $22 per day for the 5 Day or $19 per day for the 10 Day, which isn’t too steep as dietary cleansing products go — some weight loss and juice cleanses can cost $30 per day or more. Then again, if you consider the cost of losing your job or missing the opportunity for your dream career, that price tag doesn’t seem so bad.

Both Toxin Rid detox products worked for us without any need for a secondary product. That said, if you’re worried about testing clean after the detox, you might try using a detox drink like Mega Clean or XXtra Clean on the day of your test for a boost of detoxing power. Alternatively, you can add extra PreRid tablets to effectively extend the length of the program for $15 per daily dose (a dollar per tablet) at the time you order the product.

We trust TestClear’s products to provide consistent, reliable results.  There are plenty of cleansing products out there that claim to help you test clean, but we prefer to stick to what we know when employment or legal status is on the line.

We recommend the Toxin Rid Detox Programs for anyone who has a moderate amount of time before their drug test and is looking for a thorough detox. Both the 5 -Day and 10-Day Toxin Rid may work for moderate to heavy consumers. We recommend, especially for heavy users, using the 10-Day Detox Program if you know that you have at least a ten-day window before your test. If not, no worries, we had good results with the 5-Day program as well.

Unless you smoke more than, on average, 2 grams per day, you’ll probably be fine using either product, but you can always add an additional detox drink like Mega Clean if you want to play it on the safe side.