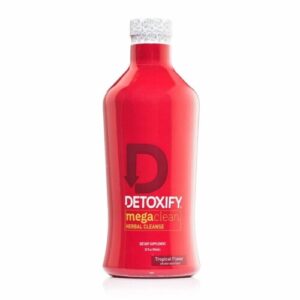 Mega Clean is advertised as being Tropical Flavor, and the scent gives us high hopes for a decent-tasting cleansing beverage: strong top notes of orange and other citrus fruits mingle with mid-tones of cherry, strawberry, and pineapple, with a sweet and fruity finish that has just a touch of tartness to it. If you’ve ever had the red Hawaiian Punch, the scent of Mega Clean will likely be familiar to you.

The flavor of Mega Clean is that of a tropical punch, for the most part, with strong elements of citrus, pineapple, and strawberry. The drink possesses a notable tartness, similar to a Shock Tart in a way, that some consumers may not particularly care for. There is a bit of an aftertaste, which we expected: after all, Mega Clean contains a proprietary herbal blend in addition to its electrolytes, vitamins, and minerals, and it’s reasonable to assume that some of those flavors would also come through. The effect isn’t bitter at all but does add a sour bite to the endnotes.

Mega Clean also contains a healthy dose of citrus pectin, which may help explain the strong citrus taste (we didn’t mind it, but if you particularly dislike the flavor of orange candies like Starbursts or Skittles, you might not find it appealing). Since a bottle contains 32 fluid ounces, it might be hard to finish it if you really hate the taste, so be prepared to chug it (holding your nose if necessary) if citrus or tart flavors aren’t your proverbial cup of tea.

Not too runny and not too syrupy, the consistency of Mega Clean makes for easy drinking and doesn’t leave a strong residual aftertaste. It’s a bright orange-red in color, similar to the bold hue used on the label, and could stain light-colored clothing or fabric, so be cautious if you’re taking it in your interview clothes.

We did notice a trace of something a bit granular when we reached the bottom of the bottle. While we’re not sure which ingredient(s) have a tendency to settle this way, it highlights the importance of shaking the beverage and drinking it quickly. Refilling the bottle with water and shaking it (as instructed) washed down any remaining ingredients without issue.

According to TestClear, Mega Clean is best used about three hours before you anticipate you’ll be tested, though it starts working one hour after consumption and remains effective for up to five hours to give you a bit of leeway. We tested ourselves at the three-hour mark when Mega Clean is meant to be at its peak effectiveness, to reap maximum benefits.

After drinking the entire bottle of Mega Clean, wait 15 minutes and then refill the bottle with water and drink the entire contents. Before long, you’ll probably have to pee—it took about 10 minutes for our testing team to feel the urge to go—and that’s a good thing! This means that Mega Clean is working to flush your system, creating a window during which you will test negative for cannabis and other substances.

During these next few hours, you’ll probably have to urinate frequently, and that’s okay! Go as many times as you need to. If you’re worried about running out of urine before the test, you can drink 16 oz of water every two hours to help extend your clean window a bit and replenish your supply. You may also have a sudden and strong urge to defecate, so plan to stick close to a bathroom in the hours following consumption of Mega Clean.

When we tested our urine at the three-hour mark, we were pleasantly surprised to test clean (we’re daily cannabis smokers and have been for a number of years). We should note that we abstained from cannabis for a minimum of 48 hours before testing Mega Clean in addition to using the pre-cleanse tablets included with the drink. We also made sure to drink only water—no coffee, tea, or sodas beforehand—to keep things as pure as possible.

This product is best suited for those who need to test clean for urinalysis in a short period of time. It also works well for consumers who are subjected to supervised urine screenings or are otherwise unable to use synthetic urine (our personal favorite way to beat a urine drug screen). If you need to clean up on short notice and don’t have the option of using a urine kit, Mega Clean can help you pass your urinalysis with flying colors, even if you’re a long-term, heavy smoker. This product won’t work for blood, hair, or saliva tests; although, TestClear makes a product for passing those tests as well and we offer guidance on how to pass a hair drug test and how to pass a mouth swab drug test if you need it.

A few possible caveats: Mega Clean does contain 42 grams of sugar per bottle, making it potentially problematic for people trying to control their blood sugar or watching carbohydrates. It may not be ideal for pregnant or breastfeeding consumers either, as its proprietary herbal blend includes some compounds that may not be suitable for pregnant or breastfeeding women. That said, you might need to weigh the potential short-term risks over long-term problems that could result from a failed drug test. Ultimately, you know what is best for your body and your situation. If you’re truly worried about an ingredient, ask your doctor to be safe.

While the Mega Clean cleansing drink packs a strong punch on its own, it works best when used in conjunction with the pre-cleanse pills included with the bottle, especially for heavy consumers. The pills are large and may be difficult to swallow for some consumers; they can be safely broken in half to mitigate this, but do not crush them.

The night before you are to be tested, take one tablet per hour for 6 consecutive hours. You should accompany each pill with a 16 oz glass of water. Then, the day of testing, time your use of Mega Clean so that you will be tested during its window of effectiveness, and make sure that the urine you test with isn’t your first pee since drinking Mega Clean! We should note that the precleanse tablets will require you to be close to a restroom, but they are very effective at clearing your system.

At $69.95 per bottle, Mega Clean isn’t exactly cheap. That said, it is much more affordable than the alternative of losing your dream job, or your existing one, due to a failed drug test (never mind potential legal implications if the test is for court purposes), and there are bulk discounts available for purchases of three or more bottles if urinalysis is a regular occurrence for you. To get the most bang for your buck, keep a bottle or two on hand for emergencies to avoid paying additional rush shipping charges right before test day. Doing this will also allow you to use the pre-cleansing tablets effectively (and we strongly recommend that you do).

If you are subject to regular urinalysis, you might consider buying a couple bottles at a time to save some cash: buying 3 to 9 bottles at once will get you 10% off your purchase, and 10 to 20 will save you 25%. While it’s a substantial initial investment, it’s one that can save you money in the long run.

There’s no shortage of cleansing products that promise results, but purchasing something that isn’t formulated based on the most recent drug testing science could cause you to fail. When used as directed along with abstinence from cannabis (obviously, you shouldn’t continue to smoke while you’re trying to detox), this product works.

The herbs, fiber, vitamins, and minerals in MEGA CLEAN support the 4 Factors of Full System Cleansing

Follow these simple steps and you will notice MEGA CLEAN’s immediate impact on your body’s natural cleansing process.