When you visit any high-quality dispensary for the first time, the choices are likely to be overwhelming. There are so many different ways to consume cannabis these days, from tinctures to topicals to edibles, and of course, smoking cannabis flower. One cannabis consumption method has a lot of variety on its own and tends to be the most confusing for new users: concentrates.

Cannabis concentrates are incredibly diverse, but are popular because they help users harness the full medical potential of the plant. Plus, concentrates are often a bit more conservative, helping smokers save money in the long run. Still, confusion about different types of concentrates and how they work prevents many people from taking the leap, so we’re going to settle the dust. What’s the difference in shatter, wax, resin, and rosin? Below we’ll cover it all, including how each one is made, the effects it produces, how you can use it, how long it lasts, and more.

Shatter is one of the most popular forms of cannabis concentrates made through a butane-based extraction and is considered a form of Butane Hash Oil (BHO). The process involves taking dried cannabis flower and using butane to separate the trichomes (which contain all of the plant’s cannabinoids and terpenes) from the plant material. The trichomes are then processed into shatter, which carries highly concentrated amounts of these cannabinoids (like THC) and terpenes.

The resulting material is hard, but brittle, with a semi-transparent, amber color that gives it an appearance similar to thin peanut brittle. Shatter can be easily broken (hence its name) so that small portions can be used with a dab rig or other vaporizing device, or pieces can be placed inside a joint or blunt when smoking. Shatter provides fast-acting effects that are long-lasting, and many people prefer shatter to some other concentrates because it often contains THC levels at 85% and higher. Concentrates in this form are also well preserved and won’t degrade as quickly as softer concentrates and oils.

Wax is another form of BHO and is sometimes called Budder, named after its soft, waxy consistency and golden color. This form of concentrate often offers high potencies just like shatter, but degrades more quickly and isn’t considered to be as stable as hard-form concentrates. Therefore, wax needs to be used soon after purchase, as opposed to some concentrates that may hold their potency for months or years.

However, the soft consistency of wax makes it easier to work with for many users, since it can be easily separated into doses as needed (as compared to shatter, which is hard to portion because it breaks into unpredictable pieces). The strong, immediate effects are comparable to shatter and other BHO products. 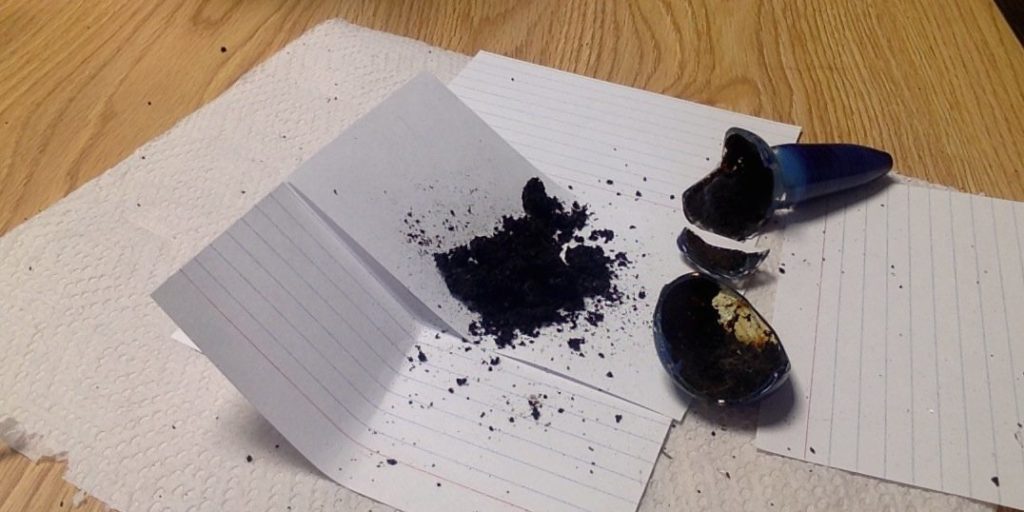 Resin is a blanket word referring to several forms of the same thing. The most common way to hear this word used is in reference to the resin found in the bowls of pipes and bongs after smoking. This thick, blackish substance is a concentrated collection of trichomes that evaporate from the bud while smoking.

Technically, the term resin refers to all of the trichomes and sap-like material that covers the flower and sugar leaves of the plant. This resin is responsible for protecting the plant through its flowering phase to help the cannabis plant reach maturity, but it also contains all of the active cannabinoids needed to produce medicinal effects. When resin is collected from dried cannabis flower, it’s called kief.

Fresh resin (aka trichomes) can be used to make solventless concentrates, like dry sift or ice water extraction hash (pictured above). Additionally, resin in the form of kief can be added to bowls, joints, or blunts to boost the potency. Some users even scrape and smoke the resin from their bongs in order to utilize every bit of the THC from their stash.

Rosin is one of the only forms of cannabis concentrate that can be safely made at home. Rosin refers to a concentrated cannabis solution that is formed when dry flower is processed with a combination of pressure and heat. Many people press rosin at home with a hair straightener, but some dispensaries offer a rosin pressing station where people can opt to use some of their freshly purchased flower to make rosin. Rosin is a thick, waxy substance that can be used on a dab rig or with some vaporizers.

Which Cannabis Concentrate is Best?

There are many types of cannabis concentrates, though there is no one concentrate that outweighs all the rest. Instead, choosing the best cannabis concentrate product for you depends on several factors, like your personal preference, budget, the materials you have (or would need to buy), your tolerance, and more. Cannabis affects everyone differently, so you’d probably need to try out each type of concentrate to decide for yourself it’s best for you. When trying new concentrates, go slow, as many are 20-100 times stronger than just smoking dry herb. For a little more insight on proper concentrate etiquette, check out these 10 rules for dabbing.

What about CBD Concentrates?

Great question! CBD concentrates like isolate and distillate have become quite popular, especially for those who live in non-legal states (because CBD can be purchase legally online). To make an isolate, the the individual CBD compound is separated from the hemp plant to make an extremely pure form of CBD — typically 99% CBD to be exact. We’re big fans of CBD isolate (pictured above), because it’s effective and can be smoked out of a dab rig, vaporizer, or loaded on bowls or in joints. We really like the 99% CBD isolate from CBDistillery (read our review or just buy it now).

The 10 Best Cannabis Strains for Meditation

How CBD Can Benefit Your Workout Routine