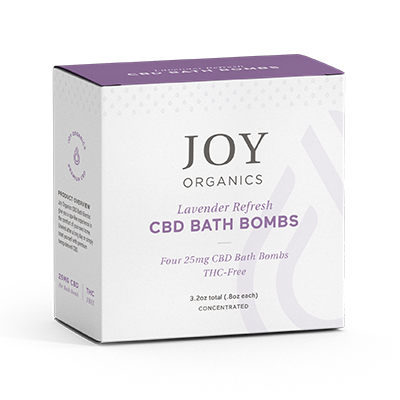 Immediately, before even removing the plastic from each individually wrapped CBD bath bomb, these fragrant little spheres offer a heavy aroma of pure lavender essential oil. If you’re familiar with high-grade essential oils, you can tell that the fragrance from these bath bombs is natural right away. As you drop them into your bathwater, the fizzing immediately releases a burst of the floral scent into the air. We were only disappointed when the smell began to fade from the room (after about 15 minutes).

Each 25mg CBD bath bomb is wrapped individually to maintain freshness (and potency) until you get ready to use them. The tiny bath balls are similar to other high-quality bath bombs we’ve tried — round and small in size, about the size of a gumball or old-school jawbreaker.

When dropped into a warm bath, the CBD bath bomb starts fizzing away instantly. Because they are small in size, the initial fizz factor diminishes pretty quickly (about 5 minutes), leaving your bathwater fresh, fragrant, and infused with a moisturizing oil likely lent by the hemp and cocoa butter. It leaves skin feeling luxuriously moisturized and slightly fragrant.

This package contains four 25mg CBD Bath Bombs, and we’ve made our way through three already. The first time we tried it out was after a long, physically strenuous day (which included packing, moving, and unpacking a friend’s personal library). Sore from the shoulders down, we dropped this tiny bath bomb into a warm bath and settled in to soak.

The initial experience is almost surreal–its surprising how relaxing the lavender scent is on its own. After about twenty five minutes, just as the water began to feel cool, we noticed prominent effect from the CBD. Some of the pain had released from our back, shoulders, and neck. Although these areas definitely needed the relief, most of the soreness was concentrated through the hips and legs.

This pain and fatigue melted away some during the bath (we’d say from a 6 to a 2 on a 1-10 scale). Residual discomfort was easy to combat with a CBD topical after we dried off. The soreness didn’t return for over 5 hours, just before time for a nighttime dose of CBD.

The next time we tried one of these CBD bath bombs was for a patch or dry, itchy skin that formed as a result of the bitterly cold weather. The small area, which looked like a rash from constantly scratching, covered the outside of our forearm. The initial experience with these bath bombs was the same as before.

This time, after only ten minutes, the redness and inflammation faded from the area. The itching ceased, and after the bath it was pretty difficult to identify any irritation in the area. We would say that this was easily our most profound experience with any CBD bath product. The itching didn’t return, even after wind exposure, so we never felt the effects fade.

Another tester tried the third CBD bath bomb against sore muscles after a heavy workout. He reported that relief came after about 25 minutes and was substantial compared to many similar topical products he’s tried. When paired with a post-workout recovery dose of his usual CBD tincture, he described the pairing as “almost too good to be true.” He’s unsure how long the effects from the bath bomb lasted, since the tincture dose likely lasted much longer.

Joy Organics CBD Bath Bombs could be potentially useful for a range of conditions that respond to CBD. The most notable may be muscle and joint soreness or swelling, since CBD can help reduce inflammation and pain. Certain skin conditions may also respond well to CBD, and these bath bombs provide an option that offers full body coverage. When our team  used this bath bomb for athletic recovery, it outperformed many topicals we’ve tried before.

This product could be used on its own for a number of ailments, but we found that it lent the most lasting relief when paired with other CBD products. Depending on the condition or symptoms you wish to manage, this CBD topical product may pair nicely with a systemic CBD product.

Oral tinctures, like this 1000mg CBD oil from the same brand, are popular and may provide lengthy effects. Joy Organics also offers multiple other systemic CBD options, like the Lite Citrus Breeze CBD Vape, that may pair well with these bath bombs. For further topical relief from skin concerns, the CBD salve poses a viable option.

This box is packed with four bath bombs that each contain 25mg of CBD, and Joy Organics charges just under $20 for the set. At that price, you’re looking at $0.20 per milligram of CBD, which is a pretty good price compared to some of the competition. For instance, Canna Comforts Cavalier and Femme Fatal CBD Bath Bomb cost $8 each for 20mg of CBD (or $0.40 per milligram).

There are multiple CBD topical or skincare products similar to these bath bombs from Joy Organics. While you may find another product works comparably for you, we think it’s worth noting that we found these bombs effective in every circumstance. They’re made with natural, wholesome ingredients that are gentle for even very sensitive skin.

If you need full-body topical coverage (and like the idea of bath salts), there’s probably no reason to look any further than these Lavender Refresh CBD Bath Bombs. If for some reason you do need an alternative (like a different scent) you can try one of the other bath bombs we’ve reviewed. Ambary Gardens Bath Bombs, for instance, are available in Lavender & Rosemary, Ylang Ylang and Cedarwood, or Orange and Patchouli scents.

Suggested Use: Fill your bathtub with warm water and add a bath bomb. Relax in the bath for 20-30 minutes to get the most out of your CBD bath bomb experience.

THC is removed using a proprietary chromatography process. Every batch is third-party tested to confirm our products are THC-free.