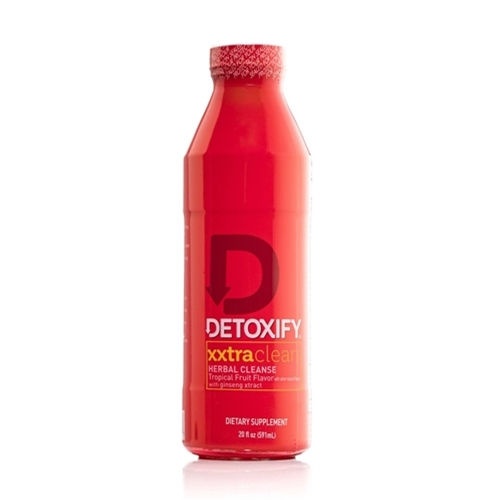 Want to try the Detoxify XXtra Clean Cleansing Drink? Use our unique TestClear Coupon Code ‘TESTCLEAR10’ for 10% off your entire order!

Perhaps we should begin by saying that the Detoxify XXtra Clean Drink is designed to work for urinalysis drug screens. It will not work for blood, hair, or saliva tests; although, TestClear makes products for passing hair testing and mouth swab testing as well. Since most drug testing is conducted through either urine or saliva screens, it’s applicable for many people. We think this product is especially useful if you’re subject to supervised drug testing (where someone is physically watching you pee) or are otherwise unable to use a powdered urine kit, our favorite way to pass a urine drug test. If you need to test clean on short notice and won’t be able to use powdered urine, XXtra Clean is effective for even long-term heavy smokers when used correctly.

There are some potential caveats: first, XXtra Clean Cleansing Drink contains 26 grams of sugar per bottle, so it’s not ideal if you’re trying to control your blood sugar or count carbs. Second, due to a few components of the proprietary herbal blend, XXtra Clean may not be a good choice for pregnant or breastfeeding consumers. It is up to you to weigh the potential risks and benefits in your situation and decide what’s right for you. If you’re concerned about a specific ingredient, it’s okay to ask your doctor about that ingredient to be on the safe side.

Detoxify XXtra Clean advertises itself as Tropical Flavored, and the smell of the product reflects that. The predominant note is citrus, mainly orange but with hints of lemon and grapefruit. These tones mingle with the sweet scents of cherry, pineapple, and strawberry, making for a lovely bouquet with a touch of tartness. Think red Hawaiian Punch with some Shock Tarts shaken up in the bottle.

We found the flavor of the Detoxify XXtra Clean to be true to its name. Tangy citrus (again, primarily orange, but with a light kick of tart lemon and grapefruit) adds brightness to the fruity mid-tones of pineapple, strawberry, and maraschino cherry. There is a notable, almost biting tartness to the aftertaste that reminded us of a Shock Tart. It’s not unpleasant, but it is intense and could be off-putting to some consumers.

There is a sour, tangy aftertaste that isn’t exactly awesome. But then again, we aren’t exactly drinking XXtra Clean for the taste. We suspect that the flavor comes from the proprietary herbal blend within the beverage, and we’re okay with it.  It isn’t bitter, but it is a little aggressive at first and maybe overwhelming to people with sensitive palates.  If this is you, try downing it in a few gulps as possible to minimize the aftertaste.

Since the Detoxify XXtra Clean contains a significant amount of citric acid, its strong citrus taste makes sense. That said, if you’re put off by orange flavoring in candies and other foods, you may find it hard to drink. The bottle is smaller than its cousin Mega Clean and contains 20 fluid ounces versus 32, so it’s easier to down in a few big gulps.

The drug detox drink itself is similar in consistency to tea and bright red. It lacks the syrupy taste of many commercial fruit beverages and doesn’t cling to the mouth’s tissues, making for a short-lived aftertaste.  Be cautious of drinking XXtra Clean in your white interview clothes, as it could stain if spilled.

According to the information available from TestClear, Detoxify XXtra Clean Cleansing Drink is best used a few hours before you need to test clean. It becomes effective one hour after consumption and remains effective for up to five hours, allowing you a bit of flexibility when timing your test. We tested it at the three-hour mark when TestClear explained that the product is most effective to see maximum results.

After drinking the entire bottle of XXtra Clean quickly, we waited fifteen minutes before refilling the bottle with water and drinking the entire contents again, also fast. We felt the urge to urinate within ten minutes of finishing the water, and unless you’re dehydrated (a no-go for cleansing!), you’ll probably also need to go sooner rather than later. This means that XXtra Clean is working to flush your system and create that window during which you can test negative for THC.

Over the next few hours, you’ll likely need to urinate often. Again, this means the product is working, flushing your system of toxins and ensuring a clean testing window. Go as many times as you need to before your test, drinking up to 20 ounces of water every two hours as is necessary to maintain your supply.

When we tested our urine at three hours from ingestion, we came up clean! The THC line wasn’t as strong as the control line, but it was a passing result nonetheless. We should point out that we abstained from cannabis for a minimum of 48 hours before testing XXtra Clean, in addition to utilizing the pre-cleanse tablets that are included with the drink (you can also order more if you have more time to cleanse beforehand). We also kept our beverages limited to water during this time to maximize the cleansing potential of this product.

Detoxify XXtra Clean is reasonably priced at $39.95 per bottle; the expense is much more affordable than the alternative of losing your dream job (or your current one) due to a failed drug test—not to mention the potential legal consequences if the test is for court). There are bulk discounts available when you purchase 3 or more bottles at a time. While it’s an initial investment, it allows you to keep a bottle or two on deck for emergencies and avoid additional charges like rush shipping fees. Being prepared never hurts anyone, and having a reliable cleansing product on hand can be a lifesaver in sudden situations.

Detoxify XXtra Clean is best used with the accompanying pre-cleanse pills, especially if you are more than an occasional cannabis consumer. The pills are large and strangely salty, which makes them mildly punishing if you can’t get them down quickly. To make them easier to swallow, the tablets can be broken in half, but do not crush them.

The evening before you are going to be tested, take one tablet per hour with a 16oz glass of water for six consecutive hours. You should plan to be near a restroom during this time. Then, on the day of your test, take XXtra Clean about three hours before test time as directed. Make sure that the urine you test with isn’t your first pee since taking Detoxify XXtra Clean!

There are tons of detox products available on the market that promise results, but purchasing a product that hasn’t been tested can be a considerable risk, especially if that product was formulated based on outdated science. When used as directed (and, obviously, in conjunction with abstinence from cannabis), Detoxify XXtra Clean Cleansing from TestClear works, even for heavy smokers.

How to use Detoxify XXtra Clean

Follow these simple steps and you will notice Detoxify XXTRA CLEAN’s immediate impact on your body’s natural cleansing process.

The herbs, fiber, vitamins and minerals in MEGA CLEAN support the 4 Factors of Full System Cleansing