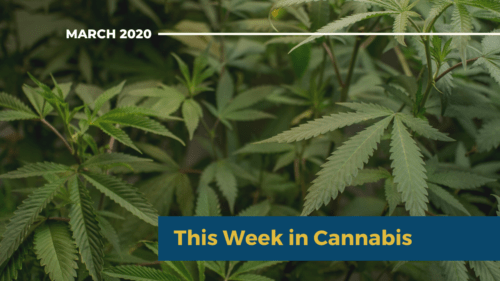 Like so many other industries worldwide, cannabis is getting hit hard by COVID-19 this week. But the immune boosting, pro-chill-vibes plant we call cannabis is managing to find some silver linings. Keep reading.

We’ve known for a while that cannabis could help with certain conditions which cause pain. But today’s research just keeps getting more specific — and a recent study identified fibromyalgia patients as yet another group to benefit from cannabis. 47% of its patients experienced enough pain reduction to reduce their painkiller dosage!

The study’s authors concluded that “adjunctive [Medical Cannabis Treatment] may therefore be considered, especially in the [fibromyalgia] sub-population suffering from significant sleep disturbances and mild anxio-depressive symptoms.” Dr. Ethan Russo theorizes that fibromyalgia itself is caused by endocannabinoid deficiencies; by correcting those deficiencies with plant cannabinoids, things can get better.

And people with ‘regular’ immune systems may also benefit from cannabis use, too. More on that next…

Cannabis and the Immune System: A Match Made in Heaven

Some studies indicate that THC and CBD actually suppress the immune system but thankfully things aren’t quite that simple.

Why? Because the endocannabinoid system and the immune system are tangibly intertwined. It appears ECS receptors may help the immune system respond appropriately to its ever-changing demands. These receptors are active across many different parts of the immune system, after all. Newer studies suggest cannabis can confer a stimulatory effect.

“I believe [cannabis] is immunosuppressive when there is hyper-immune response,” Dr. Garcia de Palau tells Project CBD, “but otherwise it regulates and corrects the immune system. In fact, you could say it functions like the endocannabinoid system, bringing equilibrium to the organism.” While more research is yet to be done, it appears that consistent, moderate amounts of THC and CBD could benefit the immune system.

Hey, it’s important too. Reports from dispensaries in the Eastern US imply that some customers are stocking up. “We’re seeing fewer customers than we normally do but those baskets are slightly increased,” says dispensary group PharmaCann.

Canna-businesses themselves are also taking preventative measures. In areas where the law permits, PharmaCann is “really pushing delivery,” which allows customers to avoid crowded spaces. Many workers are wearing gloves and making an effort to disinfect surfaces more frequently.

But even a healthy stockpile of cannabis may not be enough to make it through any future quarantines boredom-free.

If your area is facing quarantines, though, don’t panic! The good folks at Leafly have given us some good ideas via a list of 75 stoner-friendly movies.

Among the more colorful options in the list are titles like “Don’t be a Menace to South Central While Drinking Your Juice in the Hood” (1996), Monty Python and the Holy Grail (1975, what a classic!) and Reefer Madness (the original, of course).

CBD: Sled Dogs Need it, Too!

CBD’s good for more than just us humans. Our pets can benefit, too — including the cold-acclimated, ultra-athletic ones.

According to four-time Iditarod champion Lance Mackey, CBD oil has been instrumental in keeping his dogs healthy throughout the 1,000 mile Iditarod race. His dogs go through one hundred dollars of CBD a day, but apparently it’s worth it. Mackey’s dogs experience less pain and more energy; one dog has even stopped having seizures.

The future seems bright, as well. “We’re going to have every team in the Iditarod, the Quest, and every middle distance sprint dog on it before too long,” Mackey told Anchorage Daily News.

To Sum Up This Week’s Cannabis News:

While the world is experiencing challenging times right now, cannabis stands as a positive light for those needing the plant most. Whether to boost your immune system or keeping in good company while stuck at home, cannabis shines. We hope reading this week’s cannabis news shed some light on the current state of the world. Stay healthy.