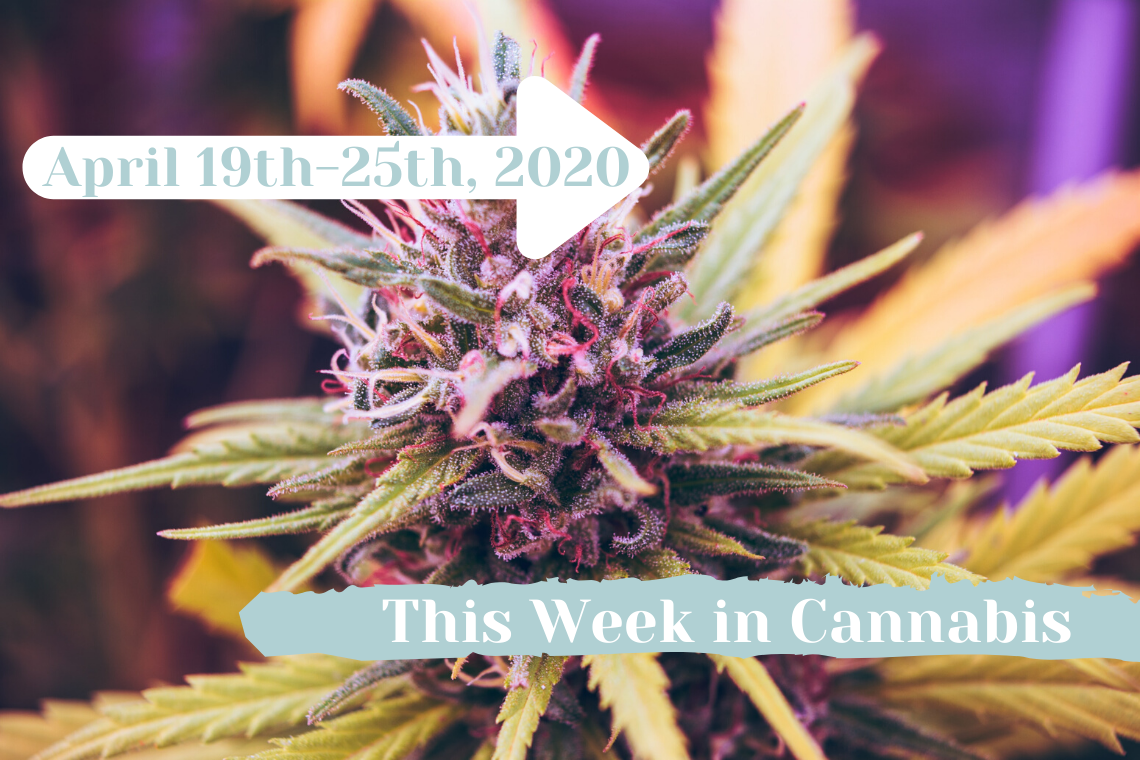 Another week under near-nationwide lockdown has passed, but that doesn’t mean the cannabis industry has come entirely to a halt.

Far from it, actually. And this week, just like last week, we have a mix of good news and bad news. Here’s what happened.

Cannabis Gardens for the Win!

Way back during WWII, societal pressures and supply shortages triggered an interesting phenomenon known as the victory garden. Faced with many of the same fears today—albeit, from different sources—people are getting their green thumbs back en masse.

But this time there’s a potential twist. Cannabis is legal—so why not grow it in your victory garden, too? That’s exactly what Project CBD advocates for in a recent article complete with a list of helpful grow-books and resources. For those who live where it’s legal, growing cannabis could be a perfect way to pass the time…and get a little more self-reliant in the process. Plus, you’ll save a bunch of money come fall-time’s harvest.

News of mass layoffs and vanished jobs are nothing new these days, but to see Canopy Growth suffer the same fate is kind of disheartening when you consider just how high the Canadian company’s hopes were a few years ago. After losing 6 billion dollars last year, Canopy is understandably on a quest to “improve efficiency.”

And that means laying off at least 85 full-time employees…and closing facilities in Africa, Canada, and Columbia. It turns out the path to full legality in these countries has been a messy one, and Canopy Growth may have been too far ahead of the curve to capitalize on some of its investments. The company hopes to adopt a more affordable outdoor-centric production plan in the future.

Massachusetts Governor, Charlie Baker, has been taking some criticism recently. Why? For closing his state’s recreational pot shops. Governor Baker does have the law on his side, though. A state judge recently validated Baker’s right to make the call—and his concerns about the shops attracting out-of-staters.

“It was reasonable for the governor to be concerned that the relatively few adult-use marijuana establishments in Massachusetts are more likely than liquor stores or [dispensaries] to attract high volumes of customers, including people traveling from other states,” concluded Judge Kenneth Salinger.

The owners of some recreational dispensaries continue urging Governor Baker to reopen things, perhaps with a temporary ban on sales to out-of-state customers.

If you think about it, social distancing has worked. Many of the coronavirus’ victims haven’t been people; they’ve been ways of living we were once accustomed to…they’ve been things. Take San Francisco’s Hippie Hill, for example. It’s been an icon of ‘stoner’ culture since the ’60s, but this year its annual 4/20 celebration is a no-go due to the city’s ban on public gatherings.

“We will not tolerate anyone coming to San Francisco for 4/20 this year,” Mayor London Breed said. Police are going to tape off the whole area to enforce things.

Nonetheless, we have faith that the essence of 4/20 will live on…if not through public displays of unity, then perhaps through a victory garden or two?

Let’s face it: Traditionally speaking, farming hasn’t been the most profitable career out there. But thanks to the emergence of hemp farming that’s all changing! Those involved in virtually all levels of hemp-based agriculture make more than their tobacco-growing peers.

Think you’ve got what it takes to reach the level of Farm Director? They make an average annual salary of $150,000, according to data from Hemp Industry Daily. Even entry-level hemp cultivators are reportedly making decent middle-class wages.

Well, this week’s a wrap. Happy 4/20, everyone! Here’s to celebrating the benefits of cannabis and hemp, so long as you do so from the comforts of your own home. And if you’re planning to begin your victory garden…happy planting! There probably couldn’t be a more fitting day to get started.