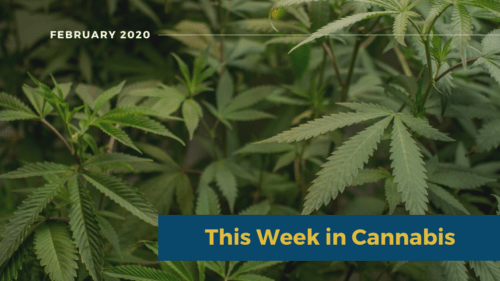 Let’s see what happened the first two weeks of February 2020.

American hemp farmers had high hopes going into 2019. Spurred by 2018’s Federal Farm Bill, 230,000 acres of hemp were planted by thousands of farmers eager to give up traditional crops for hemp and its CBD.

But what actually happened? A lot of the farmers went broke. Faced with inexperience, mold issues, and overproduction, last fall’s hemp harvest was largely a letdown. Even farmers who managed to bring their crops to harvest had it destroyed if the plants exceeded .3% THC.

What can be done? Diversification towards growing hemp for food and fiber — not just CBD-specific products — may help future hemp farmers weather these types of setbacks.

Legal Weed Is Getting Worse

Cannabis has come a long way in the past couple decades. But it seems that the trend towards ever-better bud is well…over. Average THC levels of legal cannabis are now barely hovering over 20%.

Why? It turns out that growing mid-grade weed is more scalable — and therefore more profitable — for multimillion-dollar grow operations. And that means cannabis low in both cannabinoids and flavor is being pushed to the masses. As things get worse, truly talented growers may abandon the legal market and opt to go  ‘underground’.

“Independent” Cannabis Testing Labs Might Not Be What They Seem…

Is your cannabis/hemp product third-party tested? If so…great! But that might not mean what it used to. Your independent lab of choice might actually be owned by the company whose products it tests!

Other shady practices including submitting only the best cannabis/hemp buds for lab testing and then using those same numbers to extrapolate high cannabinoid content for biomass and ‘shake.’ While many labs are truly independent, it does pay to do some due diligence.

At Key to Cannabis, we make sure that all products provide lab results and are reputable. You can learn more about choosing the best products and testing here.

You may have heard of Kannaway, a large MLM-structured US CBD company. According to press releases, Kannaway’s opening a Russian branch to make CBD available for all!

There’s just one catch — CBD is really illegal in Russia. As an example, one US citizen carrying 10ml of CBD oil was sentenced to prison for 8 years. So why is Kannaway publicizing their expansion into Russia? It could all be a marketing scheme.

BioSteel’s Co-founder, Michael Cammalleri, said, “[CBD’s] presence is already commonplace among NHL players and as a regular CBD user myself, I couldn’t be more proud to champion BioSteel’s evolution and leadership in this space.”

Tommy Chong may be known for his cannabis-centric comedy…but nowadays he’s getting serious about medical cannabis.

It all started in 2012, when Chong announced he has been fighting cancer with the help of both hemp and cannabis. Today he manufacturers his own line of 1:1 (THC:CBD) ‘Elixirs’ and plans to distribute them with the help of business partner Hollister Biosciences. As Tommy’s said before, he’s “just glad I can make a difference in someone’s life”

…And so Does President Trump

In 2015 this then-presidential candidate stated that “medical [cannabis] should happen”…in 2018 he said he’d “probably end up supporting” the end of federal cannabis prohibition.

But his 2021 budget plans say otherwise. Trump may be hoping to cut costs by giving drug enforcement freedom to operate as they see fit — even if that means overruling state laws.   “Basically what we saw in the president’s budget was granting permission to the DOJ to go after legal medical marijuana programs,” Maritza Perez, director of national affairs for the Drug Policy Alliance, explains to Leafly.

The good news is that Congress will likely try to add back in protection for state programs before 2021’s budget becomes law. And we’re still hopeful. Cannabis has come too far and has too much momentum to be stopped now.

This Week in Cannabis, we saw both the light and the dark sides of mass adoption. Tommy Chong has always been a cannabis advocate and is continuing to throughout battling cancer. We also have the opposite side of the industry that still deals with shady marketing, testing and growing practices.

This is where we step in. To help educate you, the consumer, on which products we have done our own due diligence to make sure they are noteworthy and effective for you. We only want to push this industry forward in a positive way.