Coffee and Weed: A Match Made In Heaven 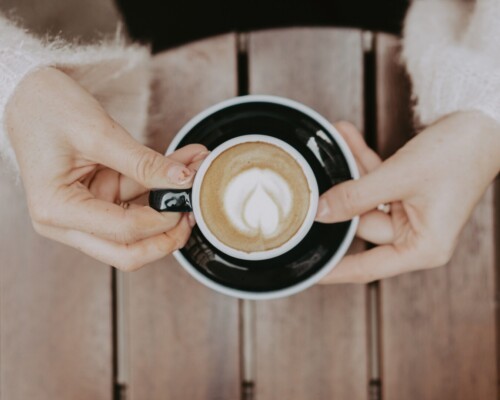 Have you ever wondered to yourself, do coffee and weed work together? Or are you putting yourself in a bad situation possibly causing the opposite effect of each? Step inside of a dispensary or look online and you find that there are a variety of  infused coffees for sale.

So what’s the deal really? Let’s look into the science behind mixing coffee and cannabis.

What are the Effects of Mixing Coffee and Weed?

Mixing coffee and cannabis changes depending on many different factors. You see, cannabis has different strains that have a variety of elements to it. You want to find some weed from your marijuana dispensaries with the same effects.

Cannabis comes in a variety of different strains that all have varying effects to them. The effects of different cannabis strains can have an effect depending on a person’s unique endocannabinoid system. Some strains can mellow you out while others act as a stimulant and are more energizing.

Talk to any budtender or cannabis advocate and you might hear the buzzing words sativa and indica. Sativa strains of cannabis commonly give you an energetic, uplifting high with social productivity. Indica strains on the other hand are known to mellow you out and give you that relaxing, couch-lock feel.

It’s important to note that similar to a sativa strain,  coffee acts as a stimulant. If you are looking to help improve the effects of caffeine a sativa or hybrid might be a better option than the mellow indica strains.

However, in more recent research, studies show that terpenes are crucial to the effects of cannabis beyond just sativa versus indica strains. Different concentrations of terpenoid provide different effects that pair well with the natural boosts from coffee.

For example, limonene gives cannabis the zippy, citrusy notes. Limonene also improves mood and reduces stress. On the other hand, Pinene provides a pine-like fragrance and helps boost memory and reduce pain within the body.

Another factor that determines the effect of cannabis is the ratio of THC present. Tetrahydrocannabinol or THC is the psychoactive compound in your cannabis. It’s important to note that people process certain compounds differently. While some people might need higher does to feel their desired effects of cannabis others might need just a tiny bit to feel its full effects. We always recommend easing in slow and steady especially if looking to mix with another stimulant aka coffee.

Risks of Combining Weed and Caffeine

Mixing caffeine and cannabis has no reported extreme risks. People have varying reactions to both, so combining them should be considered on a case by case basis. If you’re not normally good with handling caffeine from coffee, adding cannabis especially those with strains with higher THC content could create feelings of anxiety and paranoia.

Give yourself 30 minutes before you decide to add a higher dosage. If you’re not feeling pleasant, stop at this point or reduce the amount of caffeine entirely.

It’s a great idea to track your use. Write down what time of day you combined the two, how much and add the adjustments you made. It’s best to follow the changes in your intake.

Tracking your experiences allows you to reflect on how you feel both during and after. You can analyze if the combination of coffee and cannabis is a match made for you or if you’re better off keeping the two seperate.

How to Mix Your Coffee With Cannabis? 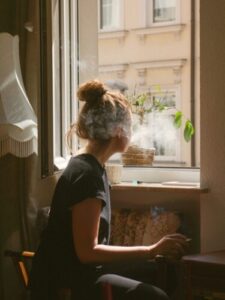 There are different ways to incorporate your cannabis with your caffeine. One of our favorites way to enjoy a good cup of espresso is with a freshly packed bowl or a tightly rolled joint. Another great option is a vaporizer if you aren’t too keen on the smell.

Edibles such as cookies or chocolate are also a great option that pair nicely with coffee. Not too sure about sugar to kick start your morning? Opt for a tincture.

Crunched on time in the AM? Why not try a infused coffee blend!

If you’re anything like us, starting your morning with a regular cup of coffee is something you just can’t imagine life without. Once we discovered how that cup of coffee along with a wake and bake session impacted our productivity tenfold, we never looked back.

This coffee-canna-connection might not be for everyone but we do have to say that the two pair quite nicely just like a peanut butter and jelly. Looking for more information on how to reduce coffee and weed anxiety? Check out this article.

As a psychoactive plant, marijuana has long been used for its recreational as well as medicinal effects. Many long-term stoners say they use cannabis to boost creativity, citing the improved creative flow as one of their favorite aspects of the herb. Since there is overwhelming anecdotal evidence linking cannabis and creativity (and creators, for that matter), leading to the common acceptance of the idea in present cannabis culture

So, is our understanding of cannabis’ power to unlock our creative power true, or is just so much blown smoke? Here, we’ll delve into what science and research have to say about the relationship between cannabis and creativity. We’ll take a look at the science of creation and imagination before examining the role cannabis plays in opening up our connection to our creative mind. We’ll also include some guidance on the practical applications of cannabis (and cannabinoids) for harnessing your creative potential.

Creativity & Dopamine: Inside the Brain

Before we go further, we’ll need a cursory understanding how marijuana behaves in the brain. Marijuana contains cannabinoids (specifically THC) that act on our endocannabinoid system to mediate the production and reception of neurotransmitters. THC in particular stimulates dopamine production, which leads in turn to a better mood, relaxed mindset, and general sense of wellbeing.

Creativity, based on research, is associated with the brain’s frontal lobe. When cannabis is consumed, it makes this area of the brain more active due to its ability to increase cerebral blood flow (CBF). The activities of these neurotransmitters spur creative outputs.

The frontal lobe also houses what’s called “creative divergent thinking.” One of the metrics in measuring creativity, it helps in coordinating abstract ideas for creative problem-solving. Divergent thinking is imperative for creativity—which is the ability to yield several solutions to a somewhat broad problem.

Divergent thinking is what makes creative thinkers creative. Examples of such are brainstorming, freewriting, and coming up with outside-the-box solutions.

A 2015 study by the University College London, reveals that the psychoactive attributes of marijuana can potentially improve divergent thinking.  Cannabis increases the ability to form abstract connections leading to breakthroughs of inspiration and ideation.

However, it should be noted that this is only effective when appropriate doses of cannabis are consumed. As too much of this psychoactive plant may lead to the opposite effect.

The memory of autobiographical events such as times, places, and so forth—which can be stated clearly and in detail, is what is called episodic memory. The recollection of these events is one of the main components of the episodic memory process.

Studies show that cannabis can enhance episodic memory retrieval. This improved retrieval of past events can make a person more creative by drawing upon more inspiration.

Another important aspect of creativity is pattern recognition. It allows an individual to conclude any sort of data, whether it be visual, mathematical, or semantic.

Pattern recognition helps find solutions to a problem by noticing related things. It helps the brain curate multiple ideas and filters the most relevant one.

While weed has been scientifically demonstrated to enhance creativity, it can also have the opposite effect. In circumstances such as using the wrong strains, overdosing, consuming it with the wrong people or environment—can hamper creative output.

Everyone has their level of tolerance and preference. The cannabinoids in weed may affect people differently. Below are some tips to use cannabis to enhance creativity.

Lastly, when using marijuana to elevate creativity—choose cannabis products wisely. Cannabinoids, as mentioned above, affects people differently so it’s important to choose the right strain for you.

You may start by picking strains that contain a mix of THC and CBD. This is because CBD can prevent THC from producing an overpowering effect. This will allow you to become more focused and productive.

If you’re consuming strains high in THC content and taking it in large doses, chances are, it may make you less creative. This is specifically because if THC content is high it may enhance divergent thinking but may weaken convergent thinking—which is also essential to creative thinking. What’s more is that studies show that a higher dose of THC (22mg) had a strong opposite impact while a lower dose of THC (5.5mg of 19% THC) increases the creative impact on fluency, flexibility, and originality. The research also infers that high doses of cannabis can, in reality, impair divergent thinking. Another reason not to overdose is that too much weed can promote anxiety and restlessness.